This day in 2012 was one of the most profound. I'll take you back to yesterday in 2012 first. Doctors had spent the past 2 weeks tsting Eric for every possible infectious disease there was from Avian flu to just about the entire alphabet and then they said it might just very well be a Zebra... What's a Zebra you ask ? A Zebra is a 'rare' disease. One that may present some common symptoms of other more know illnesses, but in actuality it becomes overlooked because most people have what is common.

The day was different, Karen spent part of the day at the hospital or came up in the afternoon and left with me. We came home Early that evening and I remember how Sunny it was still when I received a phone call from Eric's hematologists Dr.Essex and Dr.Fasan. They both got on the phone and reinforced how they thought we should go ahead and do a bone marrow biopsy again. They briefly mentioned their hunch a few days before... Upon running some additional lab work earlier in the week, results showed that if the bone marrow biopsy did indeed show this macro something or another they think they might have a diagnosis. Now in all honesty I can't speak for anyone else, but I sure wasn't convinced after hearing we had over 50 pages of pathology reports and everything was negative! So0o0o after about 15 minutes or so I said Okay - let's do it!

So on March 2nd 2012 Eric was prepped to do a bone marrow biopsy on his front left groin. Usually they go through the spine, kind of like an epidural, but Eric was on ECMO and was unable to be turned over due to the fragile nature of it. So about mid morning one of Eric's buddies, a close family friend and co-worker was on his way back to the office after being out in the field and decided to stop in on his lunch break. Of course he too was a bit skeptical about this magic moment. At this time the hospital had been letting us use one of the grieving rooms since we had been there so long. I was talking to Eric's buddy Erik when Dr.Essex and Dr. Fasan came in almost bursting with information. They were so astounded by the findings they rushed to have me sign the paperwork for treatment. So Dr. Essex begins to explain this really long named disease hemo...fag-o what ?? red cells, white cells, eating each other... chemotherapy macro ? huh ? What in the hell is this guy saying - Is this cancer?  He assured me I did not need to know what 'macrophages' were at that time and we said okay. Erik had written down all the symptoms Eric had possessed for this differential diagnosis on a napkin, which I still have if I might add. Dr. Fasan handed me the papers and gave me all the warnings of chemotherapy! So I agreed and signed away once again. At that time pharmacy had already been notified of our need for the chemo and to rush it down immediately on receiving the authorization from me to treat.The doctors left. Erik and I just looked at each other in awe. WAS THIS REALLY THE DIAGNOSIS ? One month after Eric was admitted to the hospital we could finally say he has - well HLH at that point! It took me about a week to say Hemophagocytic Lymphohistiocytosis! So Erik called up the colonel and said he couldn't make it to the afternoon meeting and stayed with me until Karen and Tom trekked back up to temple a little early that night. 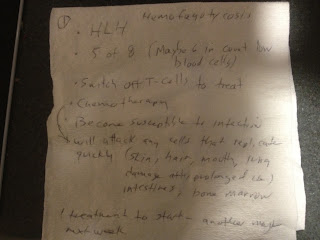 Chemotherapy was started with caution as no one was sure as to how Eric's body would react to it. His previous 10% chance of living seemed to dwindle to a 5..especially after google-ing this disease! The literature just wasn't there. Eric was the first or one of the first to be on ECMO and recieve chemotherapy while on over 4,000 units of heparin  a blood thinner used to keep his blood from coagulating and clotting the ECMO machine.

So here we are 1 year later about to celebrate - odd way to put it, but celebrate Eric's diagnosis and 1 year survival since. This journey has been unimaginable to most, but just another day to us. Who knew was Histiocytosis was? I sure didn't..

We can't thank all of our Temple doctor's enough for working so hard!

So much to do before everyone gets here! Time to go HLH-Awareness-ify everything! Go BLUE!